It is strongly recommended that you download and give the Key Collector Comics app a look. It is the perfect tool and resource for collectors who value speed and accuracy,as well as for those who need to identify and inventory key comic books in their old comic book collections.

“Nostalgia is a necessary thing, I believe, and a way for all of us to find peace in that which we have accomplished, or even failed to accomplish.”
― R. A. Salvatore, Streams of Silver

The Key Collector Comics mobile app is the world’s first resource for collectors to quickly identify which comic books are highly collectible “key issues” without the clutter of uneventful comics.  A key issue might include a character’s first appearance, iconic cover art, notable artist or writer debuts, deaths, origins, and many other instances of significance that make a comic more valuable than another or more desirable.   It took nearly two years to build the database of over 7,000+ individual issues from the Golden Age of comics to today.  Collectors have the option to catalog what they own or build a wish list of what they want to own. The Key Collector Comics app is actually available for FREE in the Google Play and iTunes store.  You can also visit keycollectorcomics.com for more info or to link to the app specific to your device.

Recently, Valiant Entertainment announced an official partnership with Key Collector Comics. That same announcement is below and, as one might expect, it contains all of the information needed with regards to where and how to download the application.

The Key Collector Comics app was developed and is managed by Nick Coglianese, whom discussed the application at length with All-Comic.com this past week. He indicated his own personal passion for comic book collecting, which to no small degree can be a vast and complex hobby typically requiring a significant amount of research, knowledge, experience, and time. This led him to develop the Key Collector Comics app, as it streamlines the process for seasoned (and new) collectors as well as valuable pocket reference guide (complete with images to help avoid potential buyer or seller confusion).


Prices (high, average, and low for each book) are (presently) based on open-source market sales data (including, but not limited to eBay and other sites) for raw comics. When compared with tracked market sales data for raw comics from other online resources, the Key Collector Comics app appears comparable and with a high degree of accuracy. The difference being time and convenience, insomuch as the Key Collector Comics app has already done all the work, which is important when searching for keys and hard to find books in multiple long boxes at a Local Comic Shop (LCS) or convention. Not everyone has a database-linked-brain filled with the current high-low market value of thousands of comic books at any given moment; however, the Key Collector Comics app is most certainly a tool and resource to that end. All you have to do is pull out your smart phone and check.

For Nick Coglianese, the most enjoyable part of the app is his ability to make a change to the back-end database and see that same change instantaneously become available to the app user. He further indicated an intention to continue to update and expand the Key Collector Comics app in both the near and long term, and will continue to partner with publishers (such as Valiant and others) to ensure the most accurate keys are listed and available for end users (collectors). New key books are being added as information becomes available, resulting in an up-to-date, always growing product.

It is strongly recommended that you download and give the Key Collector Comics app a look. It is the perfect tool and resource for collectors who value speed and accuracy, as well as for those who need to identify and inventory key comic books in their old comic book collections. 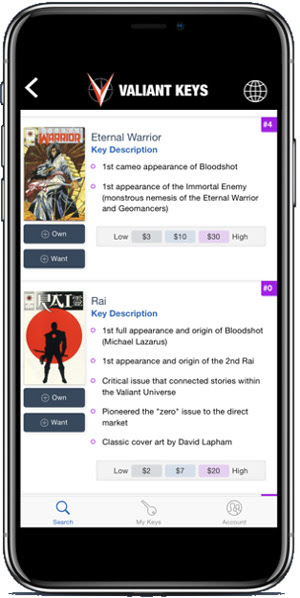 Valiant Entertainment is proud to announce that it has joined forces with Key Collector Comics – currently available for iOS and Android – for their first official publisher partnership! The free-to-download mobile app aims to make collecting the most seminal single issues from across the renowned publisher’s 25-year history easier than ever before with a complete list of Valiant’s biggest and most sought-after milestones!

The Key Collector Comics app is a concise and comprehensive resource that isolates issues of significance from the clutter of uneventful comics. It features information regarding over 7,000 key issue comic books, as well as a simplified price guide, robust search filters, and a cataloguing system to determine the value of your own collection.

To download the app for free today, find Key Collector Comics on the iOS App Store or Google Play, or visit keycollectorcomics.com.

About The Author Former Contributor

Valiant Central Podcast: The Life And Times Of Joshua Dysart